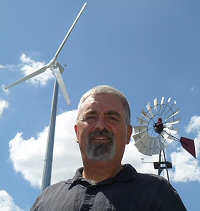 Rich Maranto is a business owner and renewable energy advocate living in Maryland.

Before starting his software development company [RAM Digital Inc.] in 1999, Mr. Maranto was in senior management with a company that produced training for utilities (coal, gas, nuclear…) and industrial facilities throughout the US. Rich led a team of over thirty talented programmers, instructional designers, and artists creating state of the art interactive applications. He was also a member of the MPEG-1 committee that created the standard for the popular compressed video format, and in partnership with RealNetworks produced the first-ever series of online programs that featured streaming audio and video.

In addition to his volunteer work with several non-profits, Rich served a 3-year term on the inaugural Frederick County Sustainability Commission, created the Maryland Tour of Solar & Green Homes, and is a founding member of Citizens for the Preservation of Middletown Valley and Frederick Bocce.

Rich lives with his lovely wife Donna in rural Frederick County adjacent to the Appalachian Trail. Their home features active & passive solar as well as a geothermal system… and assorted animals.

Tiny House Expo: Planning to build, this event is for you.

The Sun Today: Alex Young, Ph.D. is a Solar Astrophysicist at NASA.

EERE: The DOE office that invests in clean energy technologies.